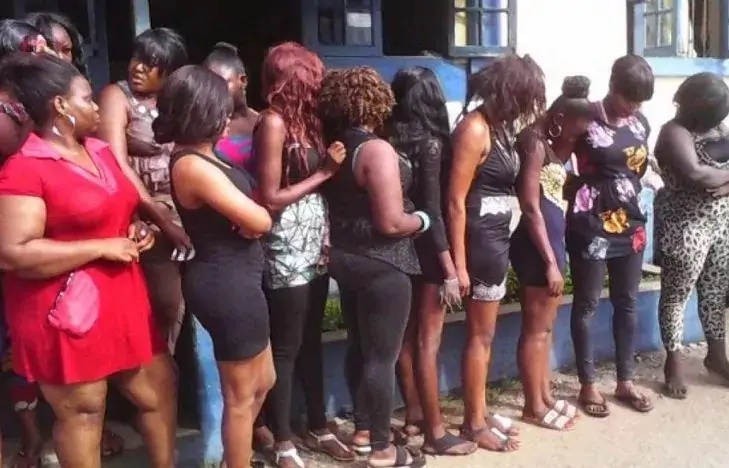 The robbers, it was gathered were said to have stormed the unsuspecting hostels in a Camry Car without a plate number, and swooped on the ladies who were clad in skimpy dresses disguise as “female students” who rented self contained apartments and disposed them of their belongings including 21 GSM handsets, estimated at N70, 000 among others at gunpoint

It was gathered that the robbers allegedly woo the unsuspecting ladies for a relationship, and in the process were led into their rooms where they “held them” down with their guns, and at gunpoint surrendered their GSM phones including money and packs of condoms as they ransack every room at the hostels.

One of the victims, Vivian Chukwudi who spoke to DAILY POST said: “I rented the one-self room contain where I help myself, and I also go to school, I have no parents again, they came as friends, and we took them into our rooms, suddenly they brought out guns and asked us to surrender our phones, money, I surrendered my GSM phones and N5, 000 with me, they did not injure anybody at all before they left”.

An Asaba indigene, Moris Ndigwe who spoke to DAILY POST said: “the hostels were nicknamed “New York Hostels” because of the beautiful girls who are tenants in the hostels, claiming to be students; they are commercial sex workers during nightfall, the hostels are always busy like mecca at nights with heavyweight men coming to have their share of sex among the beautiful girls”.

It was further gathered that Osadenis junction during 10:30 to 11:00 pm is a den of hoodlums who rob unsuspecting passersby and motorists at gunpoint during wee hours of the night.

But Acting Police Public Relations Officer, ASP Chuks Orisewezie who confirmed the incident to newsmen said: “The police are investigating the incident already, the findings is that the girls in the so-called hostels are like prostitutes, this attract unnecessary visitors to the place, no arrest has been made, investigation ongoing, while police patrol team will, especially 10:30 to 11:00 pm, hoodlums are always robbing passersby and motorcycle operators at gunpoint”.

He said that, “police patrol team will be deplored to Osadenis junction with a view to ensuring that the hoodlums operating within the area are brought to book”.